Upon reading an Op-Ed in The Wall Street Journal by Neal Freeman reflecting on the birth of the William F. Buckley’s television show, The Firing Line.  He ponders the uniqueness of what Mr. Buckley was able to accomplish for more than 33 years and 1500 episodes, something that has not happened since nor is comparable on our vast cable news channels and even amongst the presidential candidates who all but one claim to truly know the intricacies of policy making.  I snickered and then even laughed aloud while I read Mr. Freeman’s reflection truly bringing Buckley back to life with a few large…over large and long words. Honestly, they were both short words but I had not a clue what they meant and had to use the dictionary. I enjoy using a dictionary, which usually moves me to ponder on other words that my eyes go over while searching for Mr. Buckley’s common vocabulary.  Mr. Freeman honors the time 50 years ago when Buckley made history running for mayor of New York City as he ponders the presidential primaries going on today.

Mr. Freeman’s reflections led to a few of my own: Stumbling into wonder and the seeds of an intellectual life…I remember vividly discovering In the midst of a dimly lit, musty smelling, Ye Olde Books, The local used bookstore I haunted with my mom in downtown Humble.  Where she and I would visit at least weekly to trade paperbacks for more paperbacks…and I was left to wander. I discovered three authors during my many visits that still influence me in some way: Sir Arthur Conan Doyle, J.R.R. Tolkien, and Barry Goldwater. I still read Doyle and Tolkien but have moved on from Goldwater to William F. Buckley (the transformation took about five years from ages 12 to 17). 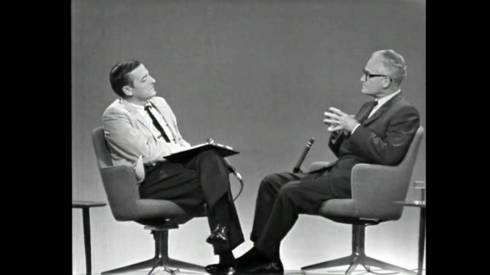 I still wear my navy blue NR t-shirts that I purchased upon seeing them advertised in very small print in the back of my first NR issue received via my subscription. I am currently reading Buckley’s fiction and find my myself renewed and reinvigorated as a conservative…I learned early on through Russell Kirk and Bill Buckley that the duty as an American is to vote.  I vote today. When asked if I am a Democrat or Republican, I easily say neither.  Philosophically, I am a conservative as we all are by nature but I also made a reasoned choice early on in adulthood and have not wavered, even if my faculties of reason are more experienced and possibly less romantic.

Bill Buckley is someone who I still want to be when I grow up.  A moment of contrast, I would say happened to me just a few days ago.  I state clearly and believe that this moment of recognition is not of growth, maturity, or progress but possibly of barbarism, demise and self-destruction. I am currently teaching Middle Ages history to fourth grade boys.  One of the elements of the course is to exam the virtue and vices of leaders and the people as a whole of the society in which we study; examples of the our subjects include, the Romans, the Franks, the Vikings, the Gupta Empire of India, the beginning and growth of Islam and such leaders as Justinian, Mohammed, Eric the Red, William the Conqueror, Charles the Hammer, and Charlemagne. We ponder whom should we emulate and why.  We ponder and discuss who is not worthy for us to follow or learn from and why…and most of the time we see the good and bad in leaders. My hope is that the boys recognize the good and noble actions of men and how they were human, thus not perfect.

Since it is February, I take time out of our normal curriculum to study our greatest President, George Washington. We are in the midst of his early life, which we spend the most time reading and discussing who George Washington up to the early days of the American Revolution.  We will wrap up the war itself and his presidency in a briefer manner as I hope to leave the interest and desire to know him for their own studies and the years to come in middle school.

My fourth graders are taking an in depth reading and study of Washington’s Rules of Civility, which he studied when is he was about 13 years old. They were a resource for young men to learn etiquette and manners in the company of others. The history of these “rules” is that they come from a French Jesuit curriculum of the 17th century.  We do not know how they came to be part of an English curriculum much less in the colonies of America in 1700’s.  Perhaps Washington’s tutor had a French educational background.  Washington would not only study the “Rules” for their own sake but used them as a tool to translate them from Latin to English and back Latin.  Insignificant as this line of study may appear, this is probably the highest form of formal education that Washington received, due to the early death of father.   He also read Roman plays and Plutarch but not much more beyond the bible itself.  Yet, his self-restraint, service toward others and his country has not been surpassed.  This is a man all should admire and study, but particularly those who are receiving an education in America.

I asked a few colleagues after the recent Republican presidential debate held in Houston, TX, if they assigned to their seventh and eighth grade students to watch it.  Before they could answer, I continued and said the assignment should be that the day after such a debate the students should then seek to treat all their parents, teachers and friends as the candidates did each other.   The decorum of the faculty lunchroom was almost turned into one of chaos and a riot.

Has America moved beyond the principles in which we were we founded? Have we progressed and the 18th century is now quaint? Perhaps, we are mistaking barbarism, licentiousness and just a lack of manners what we are supposed to become?

Neal Freeman’s Op-Ed can be found at http://www.wsj.com/articles/a-bill-buckley-lesson-for-conservatism-today-1456530358?mod=djemMER&mg=id-wsj